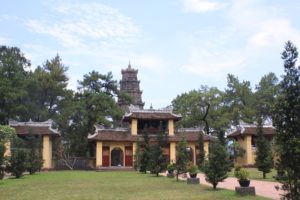 One of the tourist destination in the Central area of Vietnam is Hue city – the former capital of our country, which is famous for its culture, history and lyrical nature scenery. Hue is also well known for its historic monuments, which have earned it a place in UNESCO’s World Heritage Sites. We are confident to say that Hue tour from Da Nang City will be an unforgettable journey for visitors who come to Da Nang to explore the culture and history, especially the stories of the Nguyen dynasty.

Hue City One Day From Da Nang (2)In the morning, you will be picked up at the rendezvous in Da Nang, then we start Hue city tour. On the way to Hue, you will pass through Hai Van tunnel, the longest tunnel in Southeast Asia.

Besides that, you will have some time to enjoy the golden sandy beach of Lang Co Bay – one of the most beautiful bay in the planet.

After arriving Hue citadel, you will visit Khai Dinh Tomb – the combination of Asian and European cultural structure, embodying the beauty of this ancient city.

Thien Mu Pagoda – the most beautiful pagoda of Hue, which is considered as the National pagoda of The Nguyen Dynasty, is your next destination after Khai Dinh Tomb. You can find the relics of Monk Thich Quang Duc – his private car, an eloquent witness of the Buddhist era in Vietnam.

At lunch time, Vietnam Typical Tours introduces to you Hue specialties – the featured local dishes of this ancient city, in one of Hue’s famous restaurants.

Hue City One Day From Da Nang (3)We will take you to Hue Imperial city – the former administrative center as well as the accommodation of 13 Kings of the Nguyen Dynasty – the last feudatory Empire of Vietnam. The Imperial city is preserved as new for hundreds years, and tourists are allowed to visit many places such as Meridian Gate, Thai Hoa Palace and Duyet Thi duong theatre. Our tour guide will tell you the secret stories of the Royal family, of the Kings and the Queens’ lives.

Dropping you off at your places in Da Nang, we say good bye and hope to see you again in other tours of Vietnam Typical Tours.