Located in Bac Can province, Ba Be Lake is the largest and perhaps the most beautiful natural lake in Vietnam. It is formed by three lakes connected into a single continuous body of water, stretching nearly 8 km north to south. As one of the world’s biggest natural lakes, the surface area of Ba Be expands of 500ha during the wet season and never falls dry even at the peak of the dry season. The lake features crystal green water, beautiful islands, spectacular limestone cliffs and caves. It may take you a whole day boat trip to discover all the splendors the land has to offer.

Having been formed approximately 200 million years ago, the lake is surrounded by limestone cliffs, which in turn are covered by primary forests. The lake comprises three zones named Pé Lầm, Pé Lù, and Pé Lèng. Three rivers, named Năng, Tả Han, and Nam Cường, are the main inflows of the lake. The Năng River enters the lake through a large waterfall called Đầu Đẳng. In the lake there are also three islands, named Án Mã, Khẩu Cúm, and Po Gia Mải (literally “Widow’s Island”).

Ba Be Lake is a featured geographical science centre and a biodiversity reservoir. It makes a part of the Ba Be National Park. 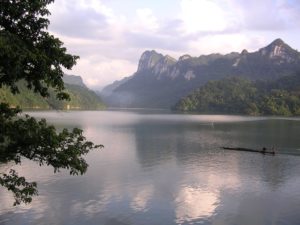 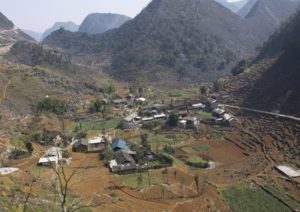 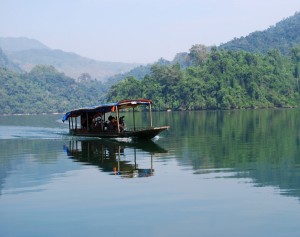